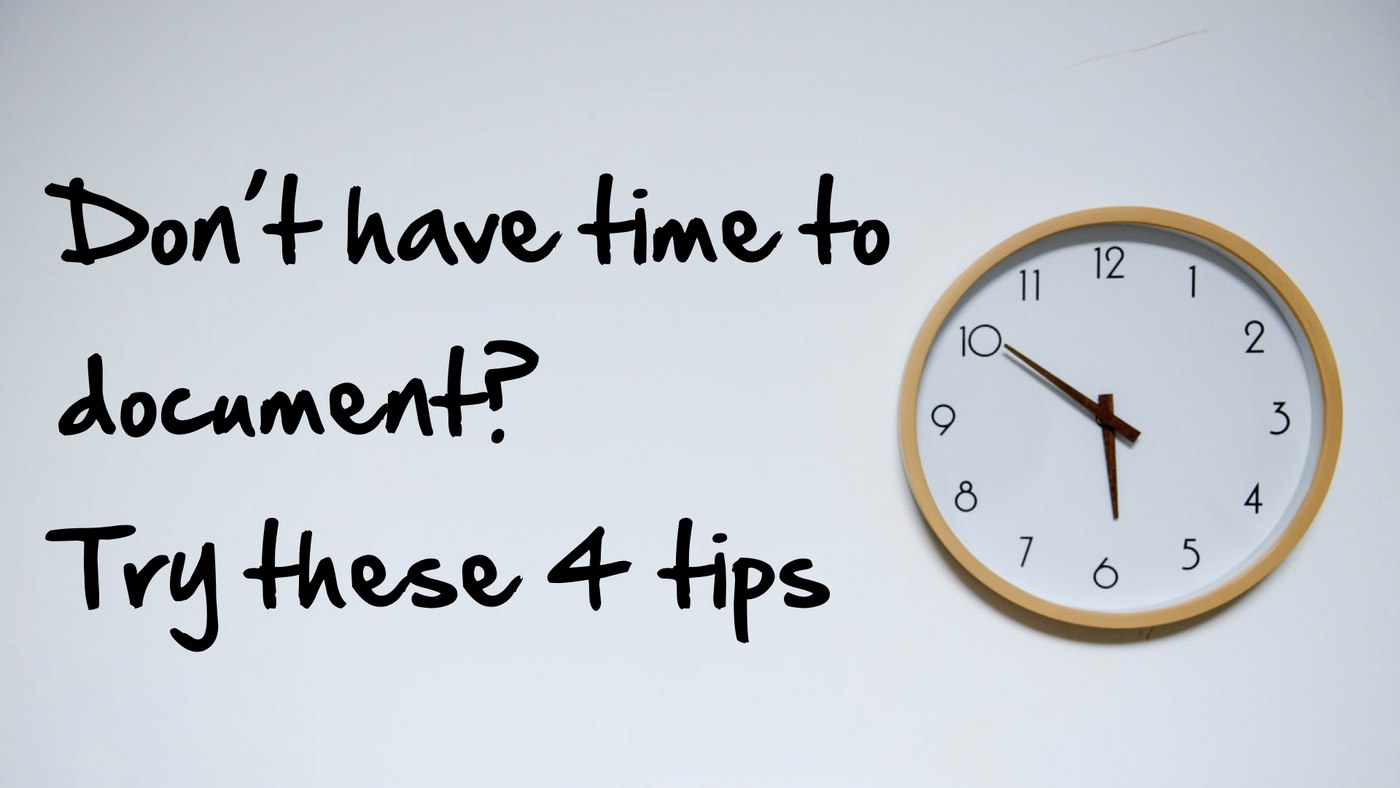 I have a good friend (whom we'll call Rick) who runs a small agency that helps online businesses.

Rick's agency is very successful, but he's at a point where he's stuck.

The problem is that if Rick's agency brings on any more clients (especially larger clients), he will run out of hours during the day to get all of the work done that needs to be done. That's because every time Rick adds another client, it requires specific tasks to be performed that only Rick knows how to do.

You're probably thinking the same thing I was when I chatted with Rick the other week—just delegate those repeatable tasks to somebody else!

The problem is that when Rick delegates operational tasks to his virtual assistants and contractors, he has to explain everything to them in great detail. And that doesn't always go very well. Eventually, after several attempts of explaining tasks over email, Skype, and video, Rick gets to the point where he tells himself, "Forget it...I'll just do it myself."

Rick knows he needs to delegate more jobs to his team, but he's learned from experience that it's actually more work to delegate tasks than it is to just do the task.

Make a system for documenting procedures

Rick isn't dumb. He's just busy! And while he knows that he needs to document his tasks and procedures so that he can properly delegate them to his team, he just doesn't have the time to do it.

At least, he doesn't think he does.

When Rick showed me his current process for documenting tasks, jobs, and procedures, I saw four areas for improvement that could dramatically cut down the time it takes to document tasks and procedures:

Let's take a closer look at each of these.

When I asked Rick about what he's documented so far, he showed me several incomplete procedures in Google docs, a few outlines in Trello, a couple of email templates, and some videos.

The first thing to do when documenting procedures is to decide on ONE PLACE where everything will live. Derek Cisler, a Training Manager at Cushman & Wakefield, came to the same conclusion and said it made all the difference when he overhauled his team's knowledge management system.

Using a system like ScreenSteps makes it easier for content creators because you know that if it's related to policies, procedures, and tasks, it goes in there. Everything is nicely organized and easy to search.

Considering moving your standard operating procedures from Word or PDF to an online knowledge base? Our guide will help.

2—Do a brain dump

In the book, Getting Things Done, David Allen explains the steps for...well, getting more things done:

If Rick were to just implement that first step—capture—then he'd be at a huge advantage. By spending a few hours a week writing down the names of all the tasks, jobs, and procedures in a centralized knowledge management tool, not only would he get a clearer picture of what he needs to document, he would have a head start for actually documenting the steps. Something we talk about next. 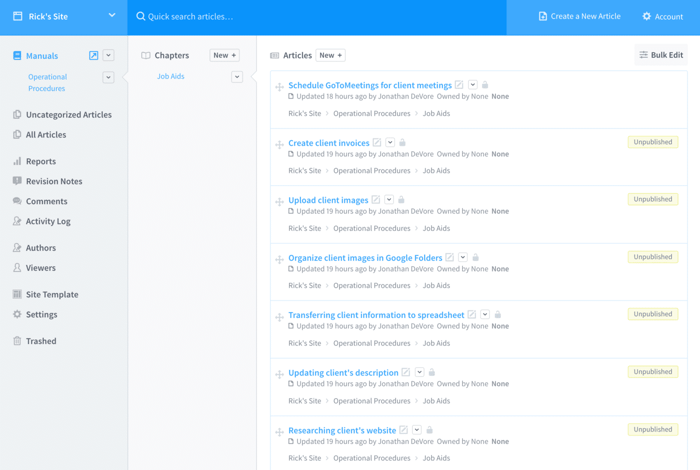 New York City wasn't built in a day, and neither is your employee documentation.

If Rick decided on ScreenSteps as his one location, and had written out all of the article titles, then the next step would be to develop a habit for writing down the step-by-step instructions for each article.

As Charles Duhigg explains in his book, The Power of Habit, to create a new habit you must first identify a cue, or a trigger. This might be something as simple as receiving an email from a client asking Rick to modify a product profile page.

With that cue, Rick would then perform the routine as he usually does—except this time, Rick would open up the ScreenSteps desktop editor for one of his articles and start grabbing screenshots as he performs the task. ScreenSteps would organize all of the screenshots in the editor automatically (not like Word where you have to copy and paste images one-by-one) and Rick could either write up the procedure then and there, or come back to it later to polish it up. 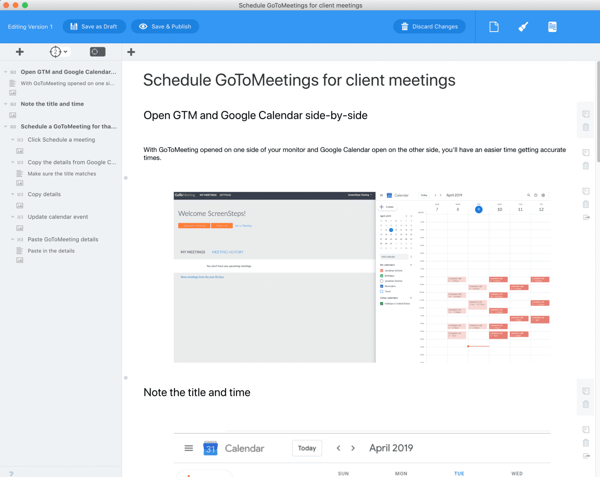 The important thing is that ScreenSteps does not add a lot of effort to capturing the process because of the built in screen capture.

Finally, Rick could reward himself for capturing the details of the task by eating some jerky or drinking La Croix. After doing three or four of these a day, Rick could have the bulk of his jobs documented after a couple of months.

ScreenSteps can do more than just grab screenshots. You can include foldable sections if you need to document decisions, use checklists for lengthy procedures, and include inline links to other articles for more details. Check out this blog post for ideas on how to use those features to write complex procedures.

Once Rick has documented his jobs, he can put them to use.

The secret of writing great documentation is getting feedback from actual people using the documentation. As Rick assigns tasks to his Virtual Assistants, they'll use his documentation and provide him with feedback.

Either Rick can update the documentation himself, or he can take advantage of ScreenSteps collaboration features (such as editor notes or comments) that enable others to make contribute or make updates to the articles themselves.

The documentation is considered "live" and being constantly refined and improved. Since procedures are constantly changing and improving, it makes sense that the documentation would evolve as well. Rick will probably never be done with documentation, but by creating a habit of making adjustments on a regular basis, it's not going to overwhelm Rick (and as his Virtual Assistants gain mastery, they can take over documentation).

Big or small, it's the same problem

While Rick's agency is a small operation, he has the same challenge as big companies—how do you get the know-how out of a subject matter expert (SME) so that other employees and contractors can do the same work with similar quality?

The above process will work for small companies like Rick's and it will work for large teams and organizations like Cushman & Wakefield. Just do a little bit at a time and before you know it you'll have a robust knowledge base that can speed up the time-to-proficiency of new employees and allow your team to delegate more tasks to each other without a lot of hand holding.